BUðIR ON A DREARY DAY - BEHIND THE CAMERA

Last weekend I enjoyed a fun and successful time at the St. Paul Art Crawl at the Union Depot building in downtown St. Paul, Minnesota. It can be hard work getting ready for a show, with the obvious printing, packing, transporting and bookkeeping chores. What I find the most challenging, however, is deciding which images to print, at what sizes and in what medium. I can struggle with this for days, although I have already learned that what often sells the most is not what you expect.

I have been told that local images sell best, so for a St. Paul show I would expect St. Paul images to sell most, followed by images of greater Minnesota. While this is sometimes true, I was pleasantly surprised when my first sale at the St. Paul Art Crawl was a matted print of this image of the black church in Búðir, taken during our Iceland visit in August.

Why was I so amused that this was the first image to sell? Mainly because it's an image that I captured under less than ideal shooting conditions. After trying to capture the church from multiple locations and angles, I was almost ready to admit that there was nothing special happening with the light or the sky and that I would have to wait until my next visit to get a good shot here. It was dreary, gray and misty. It took some encouragement from my wife and her active participation is helping me look for different vantage points until I found a strategy and composition that captured the moment.

To get this image, I walked far enough from the church so that I could use a longer focal length to frame it in the context of the ice-capped mountain beyond. The mist helped to separate the church from the mountain in the distance, enhancing the mood and depth of the image. While the image was shot at a standard full frame 3:2 ratio, I gave it a more square 5:4 crop (this is one of the few crop ratios I use, common in 8x10 images), allowing me to remove cars in the parking lot just to the left of the cropped frame and another building just to the right. I tried to frame the image as tightly as possible using the peak of the mountain on the top right to balance out the extreme bottom left location of the church.

The bird? That was just sheer luck. I don't think I noticed it until I looked at the file on the computer.

The 155mm image was captured at ISO 100 (for a cleaner file), f5.0 aperture (I was not concerned with getting "razor" sharpness in the mountain in the distance, just on the church) and 1/160 second shutter speed. While this shutter speed could be hand held at 155mm, especially since the lens I was using is stabilized, I always shoot on a tripod if at all possible, lock the mirror, and use a remote release or timer on the camera, to minimize the chance of vibration and getting the sharpest image possible (pays off when printing large).

Another reason why I really enjoyed this prompt and unexpected sale is that it was the last image that I decided to print for the show. I had printed only a couple of Iceland images (because I wanted to show them, even if they didn't sell!) but then at the last minute decided to bring a few additional ones. Maybe the most important reason, though, is that it is a good reminder that dramatic and jaw-dropping sunrises and sunsets are not the only times to shoot, and that sometimes it is more rewarding to capture a good image when it seems like a bigger challenge to do so.

I sold several other Iceland images at the Crawl, which once again made me question the common knowledge that "local" is what sells. Although it is understandable that local images appeal to people because they are places that they recognize or have memories at, maybe familiarity doesn't have to be geographical. I had several conversations with crawlers who described the way that an image resonated with them based on feelings or the mood of the image, rather than the specific location. Hence, an image that evokes a powerful emotion from someone can feel as familiar to them as a location they have been to. Perhaps there is a certain appeal in an image that brings you to a familiar mental or emotional place. Or maybe I am just looking for excuses to show lots of travel images, which will require more traveling in order to capture them!  Who knows!

Here I am hiking the paths around the church looking for the perfect vantage point, and setting up once I decided on the spot: 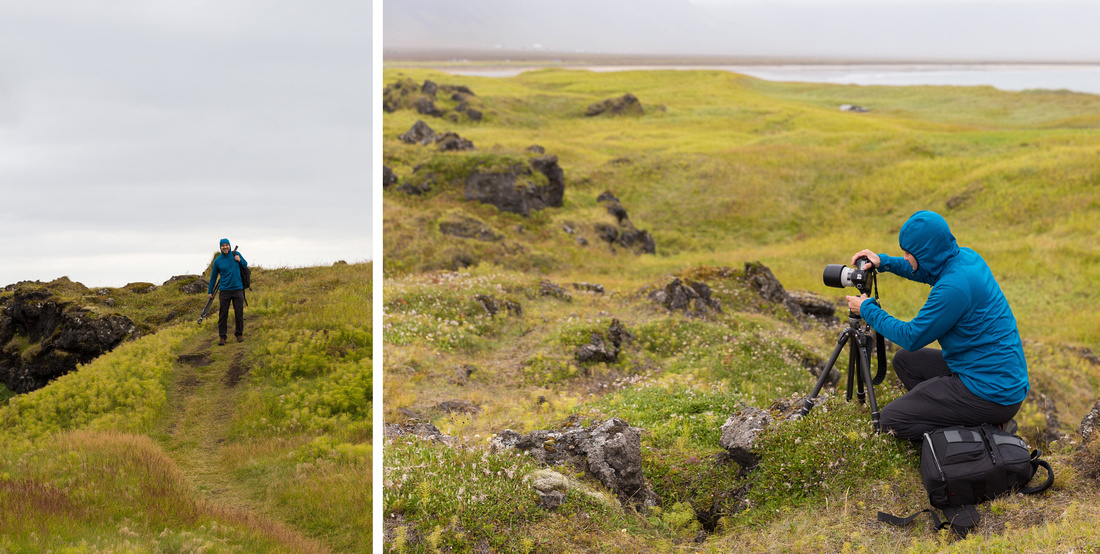 Thanks for reading, please subscribe to the blog and come back to check on my Iceland images as I keep uploading them to the following album in the upcoming weeks: