RED BUD BLOOM - BEHIND THE CAMERA

Popular Image at the Art-A-Whirl

“Redbud Bloom” was one of my most successful images at the Art-A-Whirl in 2016.  The image was captured just a few weeks before the show, at the Minnesota Landscape Arboretum.  As it happens frequently, this tree was not what I went out to photograph that day, and the shot was captured at the very last minute when I spotted the tree on my way to the car.

Stumbling Upon a Shot

I had been attempting to frame a shot of the low sun through wooded areas, but without a foreground subject of interest or intense sunset colors (the Arboretum closed before sunset colors would happen that day), the shots all seemed lackluster.  Once I noticed the tree with its beautiful colored blooms, I quickly started looking for ways to use it as a “frame” for the setting sun.

"I wanted to capture the feeling of being under the colorful tree canopy, so an ultra-wide angle lens had to be used"

One of the difficulties is that the tree is right along the walking path, so backing away from it would introduce unwanted elements into the picture, which required shooting from really close.  At the same time, I wanted to capture the feeling of being under the colorful tree canopy, so an ultra-wide angle lens had to be used.  The wider the angle, the more exaggerated the perspective, which in this particular shot helped to enhance the very cool branch forms.   I found this angle which uses the strongest curve in the tree to embrace the sun, and placed it off center as a focal point to the composition. From there, the tree branches lead the eye upwards, and enough of the canopy was captured to get the feeling you are covered by it. I also like that the image breaks down into distinct areas of yellow, green, and the magenta, while the branches seem to suggest the shape of a heart.

If you're interested in the more technical aspects of the photo, keep reading (otherwise, you've been warned!). Since it was shot at 11mm (ultra-wide angle), this picture did not require a particularly small aperture to get the required focal depth (infinity focus). The main exposure was done at f8.  The resulting shot was good, with the exception that the sun didn’t become the big focal element that I wanted to create.  Hence, another exposure was shot at f22, since smaller apertures will create bigger stars out of light sources.  A small area of the f22 shot was then hand blended into the f8 shot (by “painting” part of one image into the other one using a Wacom tablet and layer masking on Photoshop).  Why not just use the f22 shot then?  It certainly would be easier, but there are two reasons:  First, it was windy, and at f22 the shutter speed was too long, resulting in leaves and branches blurring.  Second:  very small apertures take a toll on sharpness (because of lens diffraction). While these issues may not be noticeable on images seen on the web, or on small or mid-sized prints, it becomes important when printing large scale.  Below is a side by side comparison of the f22 and f8 shots, notice the difference in the prominence of the sun: 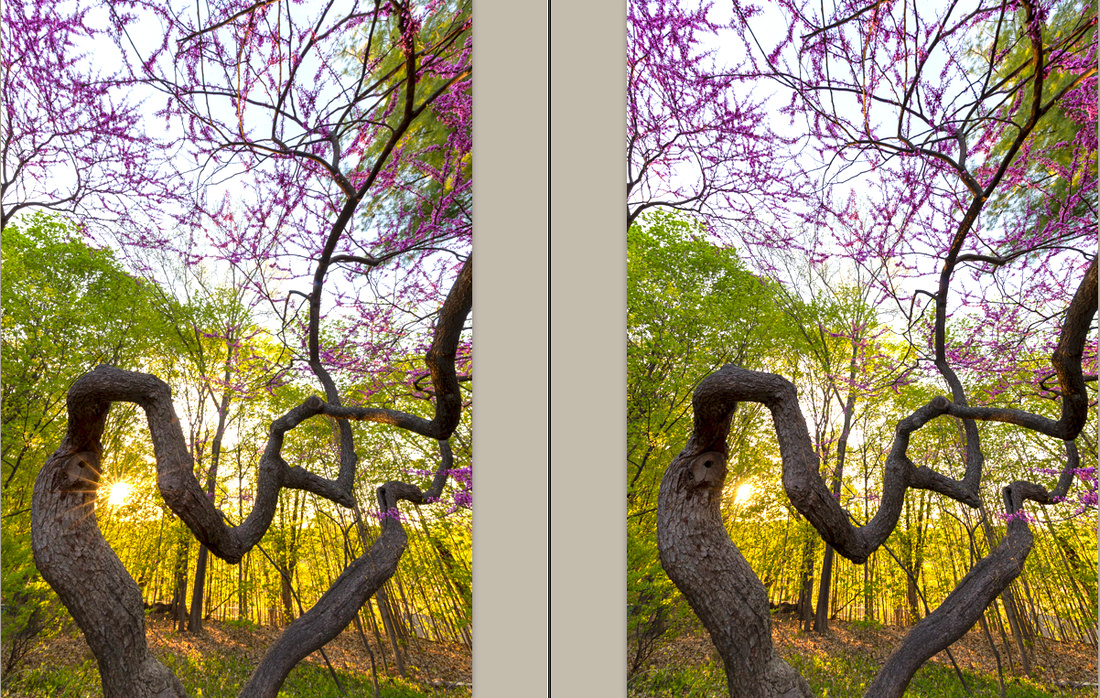 Once the two shots were blended, it only took some minor editing to get the color tones and contrast they way that I wanted them.  Based on the positive feedback to date on this image, I believe that it turned out ok!

"Redbud Bloom" can be printed in many sizes and media. If you don't see what you are looking for, contact me to discuss custom orders.