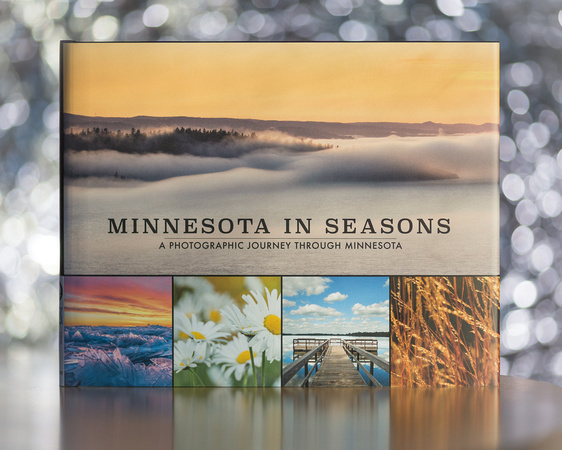 This past Friday I attended the open house and book release party for the TPT / Capture Minnesota book "Minnesota In Seasons: A Photographic Journey Through Minnesota". I had received notice that one or more of my images would be used in the book, but I did not know which. It was a very fun event where I got to put faces to names for many photographers whose work I am familiar with, and an inspiring atmosphere with a projector and multiple large screens around the room displaying all of the selected images.

During the event, several prize winners and the book cover were unveiled. I was in disbelief when one of my photographs was announced as the featured book cover image, along with four other beautiful images from other photographers. Considering all the wonderful and varied images in the book, I am very humbled to be featured! I spent the last half hour of the event exchanging signatures with other photographers, trying to get several of the images in the book signed by their creators. My wife found this particularly amusing. To hear her tell it, we looked like high school kids signing each others' yearbooks.

The Hike Behind the Image

Once the surprise subsided, I started thinking of all the planning and effort that went into making this image, of how I even hesitated setting the alarm for that early morning, in which case I never would have had the image in the first place. I also recalled how (as it often happens) this particular picture was not "the shot" that I went out to capture that morning; it often turns out that if you stay a little longer, look for other angles and compositions, and take some time to observe what mother nature may have up her sleeve at a particular moment, you might find a more unique shot than what you were aiming to capture in the first place.

"Fog Shovel" was captured the morning of June 26th this year. My brother-in-law, Nick, and I had done a two day hike on the Superior Hiking Trail, going a long up-and-down 15 miles on the first day, then a tired 5 miles on the next one. It was my first time hiking the trail, and I highly recommend it! 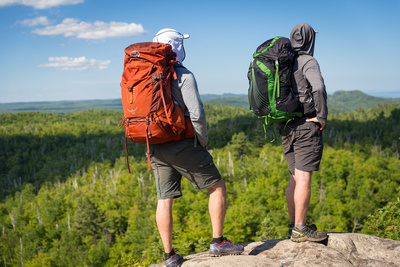 We then stayed at Camp 61 hotel in Beaver Bay, ready to drive back to the Twin Cities in the morning. Even before the weekend hiking trip, we had discussed that on this last morning we could get up early and go up to Palisade Head so I could capture the sunrise, then get an early start on the drive back. I remember going to bed that night, extremely exhausted from the hike and thinking just how nice it would be to sleep in, and asking Nick if he would still be up for it. Just a few days removed from the longest day of the year, sunrise was at 5:11am. I usually want to be set up and shooting at least a half hour before sunrise because the colors can be very pretty then! Plus, we already knew that we'd have to hike up the hill since we had confirmed the gate wouldn't be open so early. So while I knew it would be the right decision - you never regret getting up to photograph the sunrise - I was tired and hesitating! His reply: "If you're up for it, I'm up for it, I don't care". He wasn't going to give me any excuses, so I begrudgingly set the alarm for 4am and went to bed.

The vehicle gate to Palisade Head was indeed closed, so we had to hike up in the twilight on our tired legs. To my delight, the fog was rolling from the lake towards shore, and I used a wide angle lens to capture a couple of images of the Palisade Head cliff before dawn and right at sunrise.

This image is one of the shots that I planned, and I was pretty happy with the result. However, sometimes having a clear idea of what you want to capture can work against you. I have been trying to teach myself to slow down, look around, and see if there is something else to be captured, in addition or even instead of a pre-conceived notion. In this case, it wasn't until I had captured the cliff shot that I had come for that I noticed how the fog was rolling over Shovel Point in the distance, hiding and revealing it every few seconds. You can actually see it in this image, if you squint at it real close you will see just to the right of the cliff (to the left of the sun) the little mound of fog in the distance rolling over Shovel Point. All I needed was to change my lens so I could make Shovel Point the subject of my next image. I grabbed my telephoto, composed the shot to my satisfaction (getting close enough to make Shovel Point recognizable, yet maintaining enough of the fog and the lake for context) and waited for the right moment in the constantly changing scene.

I was able to capture this instance when most of Shovel Point is covered, yet the very point of it is visible - seeming cutting through the fog. I liked how the land form and fog intersect in the image, almost creating a (very flat) "X". The image was captured at 135mm at ISO 100, f8 aperture and 1/6 second exposure.

Needless to say, I am very glad that we got up on our tired legs and enjoyed this beautiful sunrise. Witnessing such beauty at a special place like this creates memories that stay with you forever, in a way that an additional couple of hours of sleep do not.

I am very impressed with the book as a whole; it is beautifully formatted and edited and the images are laid out thoughtfully and intentionally. Beyond that, it is a great representation of the active and enthusiastic community of Minnesota photographers. As I look through the images, I feel honored to be in the company of so many talented people!

To purchase a print of Fog Shovel, click on the image above to see options and pricing, or contact me to discuss custom orders.