RENEWED LEARNING WITH A NEW LENS

Renewed Learning With a New Lens

In the past year, shooting mostly around my urban neighborhood, I had often been tempted to purchase a macro lens for my full frame camera. I briefly owned one when I first got into digital photography, but sold it once I decided I was going to be a "landscape photographer". For a while I believed that, to improve and be successful, I should specialize on something and stick to that path. My perspective, however, has been shifting back towards my original feelings when I started doing photography: I want to explore broadly and shoot whatever sparks my curiosity. So here I am, four to five years after selling that lens, having just bought a similar one again!

Below are a series of images I just uploaded of my initial explorations with the Canon EF 100mm f/2.8L Macro IS USM lens, from walking around sidewalks in the few blocks around my house looking for tiny subjects in front lawns or alleys. My initial impression is that it is quite difficult to create compelling compositions at this scale. While I found it somewhat easy to create some "pretty" images of spring blooms, it's hard to find and isolate distinct and interesting subjects that are compelling enough to make an impact. Below are some of the few that worked for me, and my thoughts on why. The full series captured with natural light, using a reflector to bounce light - either as backlighting or to fill in shadows. 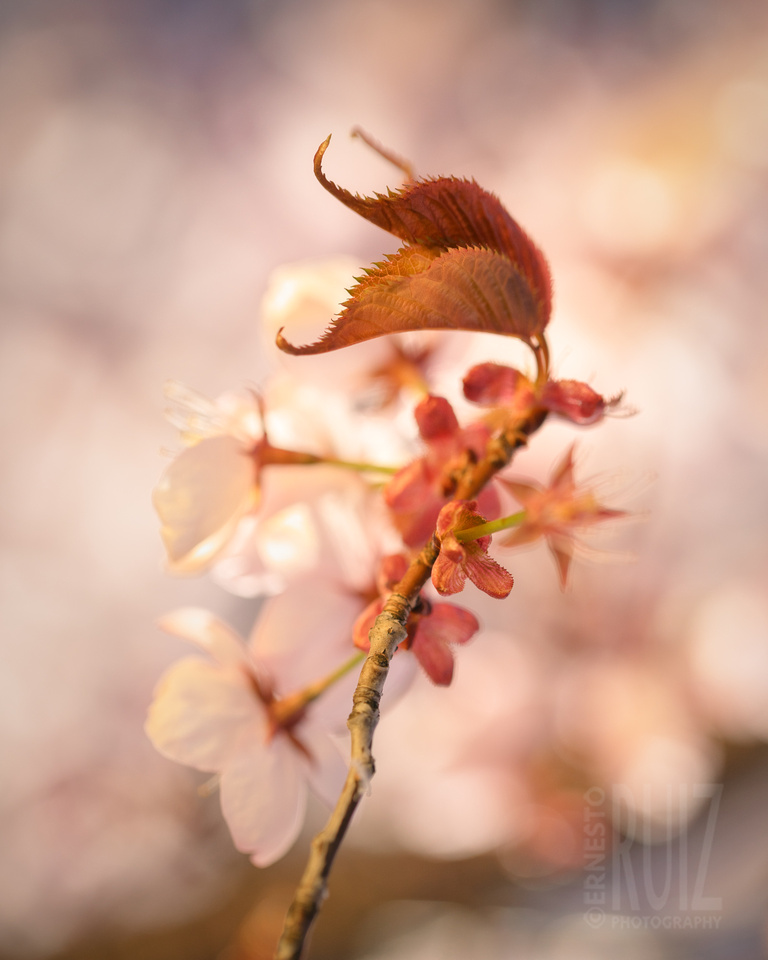 EmergingA detail of a crabapple tree coming to life in the spring.

This crabapple tree is in Como Park, a short walk from my house. I probably spent 15 minutes looking for compositions here and, to my surprise, the one the I preferred is the one that did not focus on the flowers. There is something about this little branch that made me feel like it in the process of standing up - or awakening - with spring. The ragged edges of the leaves also provide enough interest to make the shallow depth of field work. Here is a video of me capturing this shot, obviously hand-held:

One of the first subjects I spotted in my neighborhood "adventure" was the Siberian Squill, an invasive flower sold as an ornamental that has been popping up in front lawns in our area. The flowers are tiny and, though considered invasive, it seems many people are unconcerned about their spread. I don't blame them, since these little guys are beautiful. These were in someone's front yard, so I made sure to get permission from the homeowner before shooting. Even if I'm shooting from a sidewalk, I don't want to be seen pointing a camera in the general direction of a house without permission. Here, I had to do a lot of rolling around in the grass looking for standout flowers to isolate. As is often the case, I had to enlist the help of my wife to hold and direct the reflector, directing light in a way that enhanced these little subjects. Most efforts were unsuccessful, but I did achieve a couple of keepers: 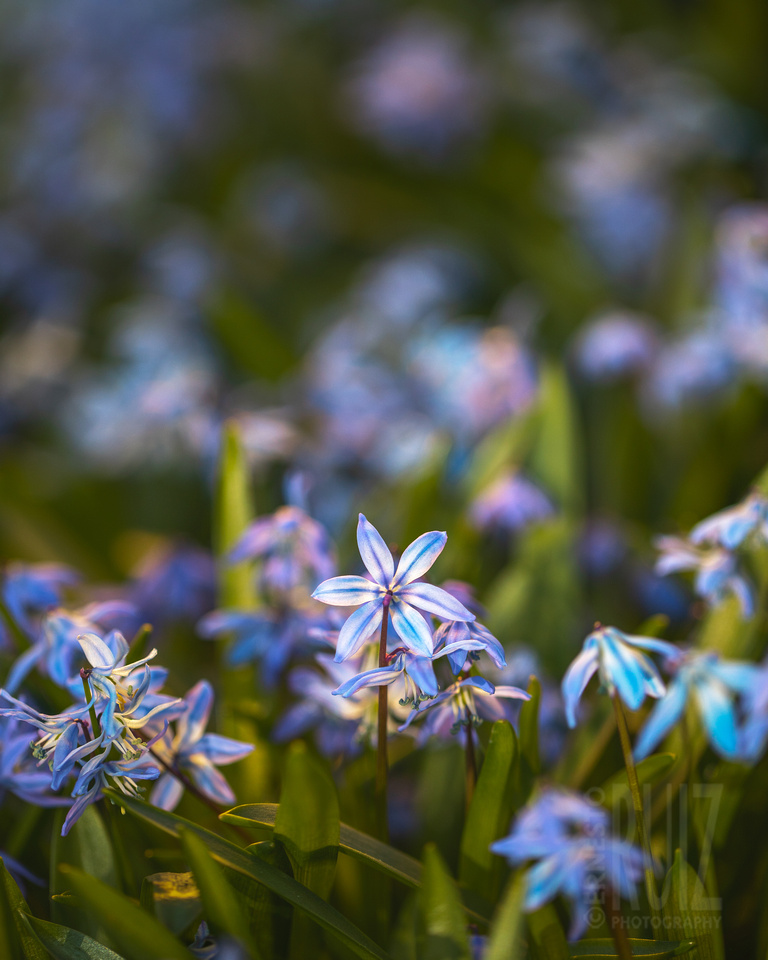 At AttentionSiberian Squill illuminated by blue hour light in a Minnesota lawn.

The image above (and the crabapple image) show my tendency to love centering subjects in a composition... There's just something about imperfect symmetry that I often find appealing. If the leaves on the crabapple seemed to be stretching up, awakening, this little squill seems to be standing "tall" and illuminated, rising above the rest. I imagine him giving a speech to the blurred audience in the background. That said, I always try asymmetric compositions based on guidelines such as the rule of thirds, as in the example below.

Alleys in my neighborhood are lined with trash, recycling, and composting bins. But they also feature plenty of gardens and flowers, either right on the alley or in the back of people's yards. These golden charm tulips were beautifully illuminated with dappled light, being filtered by a small bush next to them. Once again, looking for compositions was challenging. I shot a few of the fully opened flowers, but those shots seems somewhat boring. In this composition I enjoy the sequence of the three flowers that seem to be reaching towards the light (away from the shadow of the bush). Once again, using the reflector helped to create a beautiful "glow" that animates the scene. 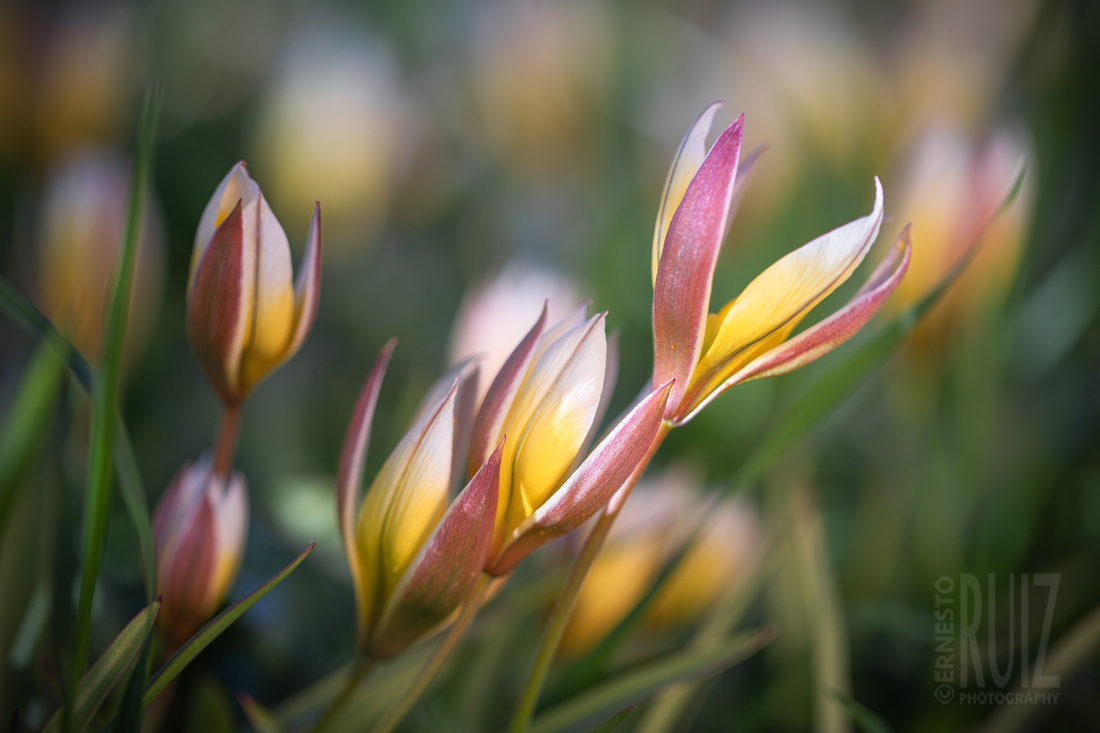 Last but not least, a subject that I hope I will be posting more images of soon! We have some prairie smoke right next to the front door of our house. I look out the window daily, to see if it's in bloom yet... No such luck, but I couldn't resist capturing an image of the emerging buds. This little guy was tiny which, combined with using a large aperture, resulted in this extremely shallow depth of field. I rather enjoyed experimenting with multiple compositions here, but (surprise surprise) ended up preferring this very simple and centered image. I cannot wait to shoot these when they bloom!

All images here were captured hand-held at ISO 200 and a lens aperture of f/2.8 or f/3.5. The lens being stabilized certainly helped. I've done focus stacking before, and most of my photography is on a tripod, but I was interested in trying something different and looser. It's amazing how shooting with large apertures and aiming for shallow depth of field quickly makes the tripod optional. I already love this lens and expect this series to be just the start of this exploration. In my newly re-organized galleries, I've created a home for these shots, so keep an eye out more of this work here: Plant Portraits Gallery.