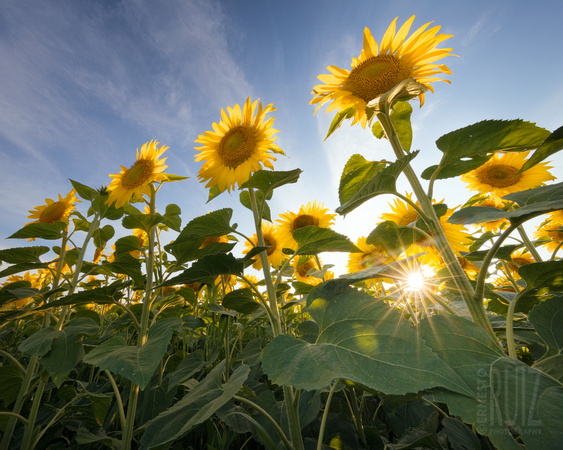 Sun Rays and SunflowersThe sun shines through a field of sunflowers. This image is featured in my blog entry about shooting sun stars: http://www.ernestoruizphotography.com/blog/2018/6/is-that-sun-fake

photos are real or "added". They are real! I never add anything to my images that was not captured by the camera. While I am sure there are filters and programs out there that let you create fake sun stars, I have exactly zero interest in doing that kind of work. Ultimately, I believe that capturing the real thing will always look better.

"You Shoot in Daylight?"

Why shoot in the sun at all? It is common knowledge that most incredible shots captured by landscape photographers are during "blue hour", before sunrise or after sunset when the light is soft. I have read professional advice suggesting that to be a successful landscape photographer, one should shoot exclusively at those times. It is true that capturing landscapes under the direct light of the sun can be challenging, with details getting lost in the high contrast or glare, often resulting in harsh images. That said, I love shooting the sun and using it as part of a composition. Shot effectively, the sun can act as a dramatic focal point to an image.

"Low sun angles can create dramatic lighting, enhancing landscape detail and texture, and emphasizing the directionality of the light"

"Don't Shoot into the Sun!"

There are many things to consider when shooting the sun. Many will tell you that the first is to take care in not damaging your eyes or your equipment. If you are shooting with an SLR, the equipment will be just fine. The sensor is not exposed to the light for more than a fraction of a second when the exposure is actually taken. If you are shooting in live view mode or with a mirrorless camera, technically your sensor will be more exposed, but even then I have not heard of sensor damage to a professional camera from shooting into the sun. So I suggest focusing on taking care of your eyes. 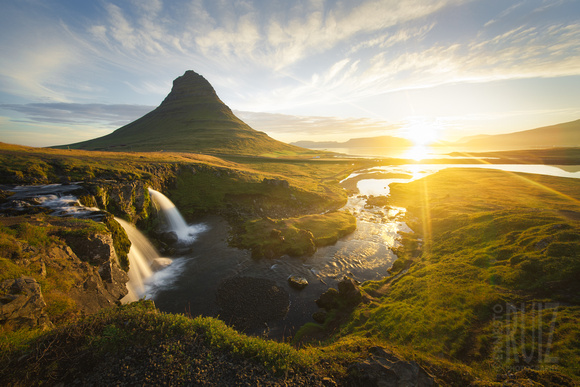 Kirkjufell SunriseSunrise at Kirkjufell, Iceland. This image is featured in my blog entry about making sun stars: http://www.ernestoruizphotography.com/blog/2018/6/is-that-sun-fake

How to Shoot the Sun

I've been told that sun stars are becoming a signature element in my images. I do enjoy shooting against the sun as much as I enjoy shooting in beautiful dawn or dusk light. Shooting the sun can yield unpredictable results, but there are things to consider that will help in achieving good images:

1. Placing the sun: If you are using the sun, carefully consider it's place in the composition! The image on the left (Kirkjufell, Iceland) places it at the end of the leading line of water.

2. Time of day: Low sun angles can create dramatic lighting, enhancing landscape detail and texture, and emphasizing the directionality of the light. The Kirkjufell image was captured just as the sun was breaking the horizon at sunrise, providing dramatic lighting on the landscape elements. 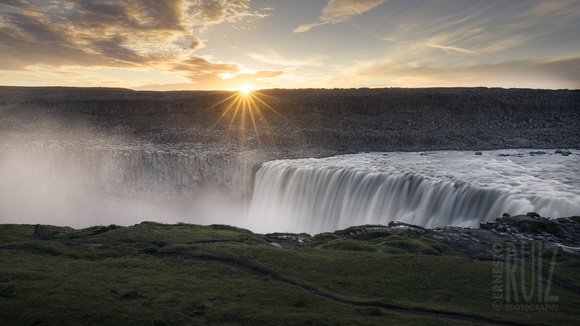 Dettifoss SunriseThe sun rises beyond the mighty Dettifoss in northeast Iceland. This image is featured in my blog entry about making sun stars: http://www.ernestoruizphotography.com/blog/2018/6/is-that-sun-fake

3. Shielding and framing the sun: I find that one of the best ways to create beautiful images and sun stars is to shoot it as it is emerging from (or sliding behind) the hard edge of a foreground element. This could be mountains in the horizon, a tree branch, a person, anything that creates a hard edge for the sun to shine from. This helps to control the contrast in the image as well as minimize lens flare. In the image on the left (Dettifoss, Iceland), the sun was barely breaking the horizon, which helped to keep the star very well defined and the sun a more discrete element in the composition (as opposed to the image directly above, where the sun had almost fully cleared the horizon). 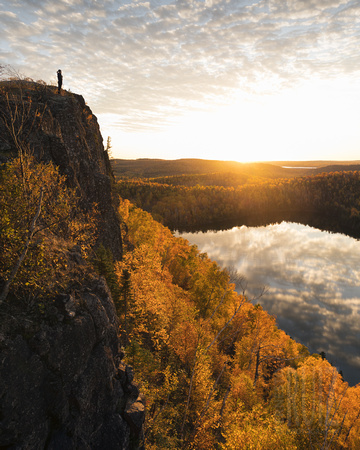 Here lies the "secret" in getting sun stars in your images. You have to shoot with a small aperture. The smaller the aperture, the crisper the sun star. The super sharp sun stars on the sunflower image at the start of this post and the Dettifoss image (above) were both shot at f/22. The larger the aperture, the more the light becomes an undefined glow. The image on the right, shot with a large aperture (f/4), does the absolute opposite to defining the sun as a star, resulting in a soft glow that I felt fit this particular image better. The Kirkjufell image was shot at f/8 so it lands right in the middle in terms of sun star definition. Since aperture also relates to depth of field, and small apertures can result in loss of image sharpness by diffraction, you have to carefully consider your approach to each shot based on your goal(s) for the image. I will sometimes stack an f8 shot with an f22 shot, so that I retain all the image sharpness I want while using the sun star captured with the smaller aperture (for more on this, see my blog entry on my "Redbud Bloom" image. If you're not selling enlarged prints, don't worry about loss of sharpness, just shoot with a small aperture if you want the sun star!

5. Lens specifications: Equipment matters, and in my experience, high end professional lenses seem to make superior sun stars. But it gets more interesting than that: The amount of points on your sun star will depend on the amount of blades on your lens. Lenses with an even number of blades will create sun stars with an equal amount of points (ex. an 8-bladed lens will create 8-point stars). An example of a sun star from an 8-bladed lens is on the bottom right. Notice how I used the tree on this example to partially 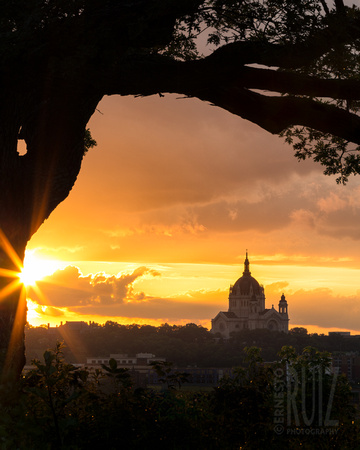 Cathedral Sun StarThe sun sets behind the cathedral of St Paul on a summer day. This image is featured in my blog entry about making sun stars: http://www.ernestoruizphotography.com/blog/2018/6/is-that-sun-fake

shade the sun and help me create  more definition on the star. Meanwhile, lenses with an uneven amount of blades will create sun stars with twice as many points (ex. a 9-bladed lens will create 18-point stars). Examples of sun stars from 9-bladed lenses are above (you may be able to make out all the points in the sunflower image). Which type of sun star fits a particular image better is a matter of artistic preference. Sometimes you only have one lens that covers a particular zoom range, but when you have multiple lenses it is another thing to consider before capturing the image.

That's pretty much it! I often use neutral density filters when shooting the sun, to get the correct exposure or to slow down the shutter, to capture the flow of water or the movement of the clouds, but that may be a topic for a different day. I hope this will help you capture some great sun star images of you own!

Enjoy My Images? Help Me Spread the Word!

Since I hardly spend money or efforts on marketing, I appreciate any help I can get sharing my photos with new audiences! Selling pictures is great, but sharing my images with anyone who might appreciate them is really the most rewarding part of this. Currently, I am trying to build my portfolio on Instagram, so please share my page with any Instagramers you think might enjoy it. Below is also my Facebook photography page: