SAINT PAUL LIGHTNING - BEHIND THE CAMERA

How Did You Get That Shot? 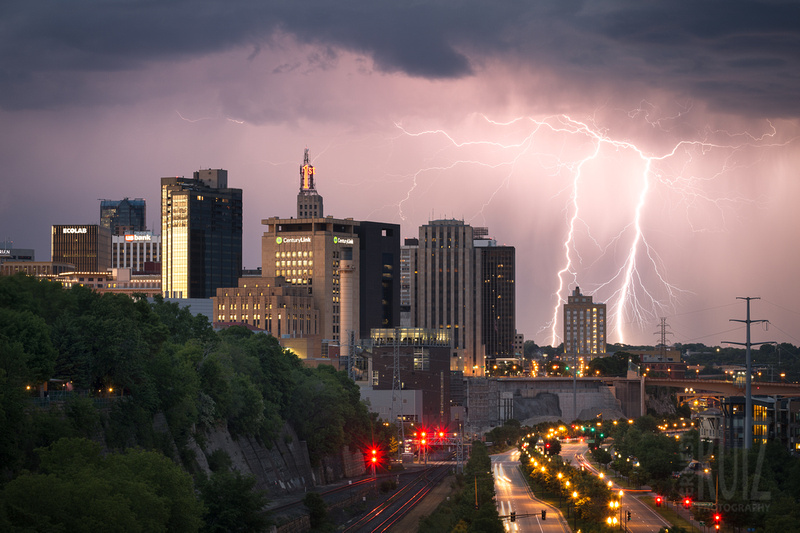 Saint Paul LightningLighning strikes in Saint Paul, Minnesota. See the story behind this image on my blog entry: http://www.ernestoruizphotography.com/blog/2017/8/saint-paul-lightning---behind-the-camera

It's been a while since I posted here, have been busy with work, travel, and life. All good stuff, so no complaints!

I have been meaning to get into more frequent blogging, and what I needed was a good reason to do it. I finally found it: Since I posted this image, I have received multiple comments and messages regarding the equipment or technique used to capture it. Some wondered if the photo is a composite (it's not). Others asked how I framed it 'so perfectly'? Was it luck? Did I use a lightning trigger? What camera do I use? Etc. I've been also been simply asked for advice in capturing similar images. So I figured it's time to write a blog entry about how this image was created, which involved planning, some decision making on the fly, some lightning-fast (see what I did there?) camera settings adjustments, and a significant stroke (or really, strike) of luck.

"Clearly this storm is more dramatic from the back end, and I should try to capture it." 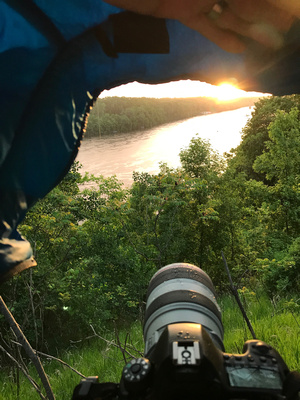 I doesn't come as a surprise to me anymore when it happens, but this is not the shot I went out to capture that evening. Beautiful clouds made for a promising sunset, and after studying possible angles using The Photographers' Ephemeris app, I decided to go shoot the Minneapolis skyline from near the Marshall Avenue bridge over the Mississippi river. I got a nice sunset shot, but was also drenched in the process by a rapidly moving storm cell. The picture on the left is me, trying to stay dry as the squall came through with strong winds pushing water horizontally. It didn't work very well.

When the sun went down, I packed up quickly and was feeling ready for a nice dinner. But, as I turn around and head towards the car, I see how dramatically dark the sky has turned to the northeast - there's a rainbow set against dark grey skies and flashes of lightning in the distance. Clearly this storm looks more dramatic from the back end, and I should try to capture it. I check the My Radar app and The Photographer's Ephemeris and decide to head to Prospect Boulevard in Saint Paul to get the storm behind the skyline. Most of the lightning is to the north and the storm is moving super fast, so I am trying to make good time and not feeling very optimistic I'll make it.

On Highway 94 I get more glimpses of the horizon which is getting constantly lit by lightning, still mostly to the north but visibly shifting farther and farther east. As soon as I get on the Smith Avenue High Bridge to go across the Mississippi, I realize that I miscalculated. The storm is already on the east side of downtown, not to the north, and moving rapidly. I'm almost out of time and driving across the bridge would be pointless. The view is perfect from the north end of the bridge, right where I got on to cross it. A quick U-turn, I park the car at the first side street and literally run up the bridge to what seems to be an optimal spot at the moment.

"Just like that, I am shooting three roughly 2-second shots every 8 seconds. I feel that I have a 75% chance of capturing something special if it happens."

I realize that I have a very short window. The storm will not be behind the city long even from this vantage point, I can see it moving left to right in real time. I've never shot lightning before, I have no fancy lightning trigger, but I have to maximize my chances of capturing this shot. I set the tripod, mount the camera, compose the image fairly tight on the city, set and double check the focus, and hope I can capture lightning inside the composition that I created. Then here's what I did (this is where you jump ahead if you're not interested in camera settings):

I set my camera to C1 ('custom 1') shooting mode, which is often my starting point. The nice thing about custom shooting modes (at least on Canon bodies) is that there is not one thing on the camera that you are not 100% sure what it's set to when you turn the wheel to that particular mode. So in the second that it took me to rotate the dial to C1, I am certain that now I'm starting from: full resolution RAW, mirror lock, 2 second delay, three shot bracketed exposure with 2 stop increments, f8 aperture priority, ISO 100, etc. I decide that I don't have 10-15 seconds to mess around with connecting my wired remote or waiting for my WiFi remote to connect, I'll just rely on the delay and try to touch the camera as lightly as I can when I release the trigger. I do take a couple of seconds to bring up the Quick Menu and adjust the exposure, I set the bracketed shots to only 1/3 stops apart (I'm only using this feature, in this case, so that I can fire three-shot sequences every time I release the trigger, not really because I needed to bracket the shot) and I underexpose the bracket by 1.5 stops (gut feeling, the last thing I wanted to do was burn out the lightning in the image if I was indeed able to capture it). Then I switch to Live View shooting mode, so the mirror stays locked.

Just like that, I am shooting three roughly 2-second shots every 8 second, so I feel that I have a 75% chance of capturing something special if it happens. This image was captured on my second bracket, probably less than 30 seconds after the camera was mounted on the tripod. And good thing, because that was it. I kept shooting for another couple of minutes but the storm quickly moved to the right and farther away, and I had no more luck.

The morals of the story are getting to be familiar: you can't expect the shot to come to you, and fortune favors the flexible. A lucky (yet hard earned) shot on my card and it was time to go home, dry out, and eat a nice warm meal!

Thanks for reading, please subscribe to the blog and come back often to check on my new images! Also, please follow my pages on Facebook and Instagram, where you can track my new images as I upload them: